Fireless (Haybox) Cookers use retained heat to cook the food and save energy. They are also very convenient as food can be prepared and kept hot for hours and then served up when needed. This can be great when having friends for a meal – you can relax and have a drink and then magically produce the meal from within a box or a basket.

But what precautions have to be taken with food safety? Is the growth of bacteria in food kept at 40 to 50 deg C going to be an issue with haybox cooking? We looked into this by monitoring the temperature of the food as it slowly cooked in the haybox. The graph below shows what happened when we cooked ratatouille.

The initial temperature wasn’t quite the 100 deg C we were expecting. This was probably due the fact that there was not much water when we put it in the haybox – most of the liquid comes from the vegetables as they cook. The start temperature was around 95 deg C at around 14.50. It looks like on average we get a temperature drop of around 10 deg C per hour. This is slightly higher in the first few hours and flattens off as time goes on. But 10 deg per hour seems to be a good ‘rule of thumb’.

Nearly 3 and a half hours later, when we were ready to eat, the temperature was just under 60 deg C which was just right – there was no need to warm this up. It went straight to the table to eat with some mixed rice that was cooking in another haybox cooker.

In the UK, 9 to 62 deg C is regarded as the danger zone for bacterial growth. As the ratatouille was only in this region for such a short period, there is little risk of bacterial growth and it was safe to eat.

In practice when food is cooked in a well insulated haybox, it should be safe to eat even after 5 hours when the temperature should be around 50 deg C. Most people would consider this hot to the lips and would not bother to reheat it.

The advice from the Apprevecho Research Centre on food safety when cooking in a haybox is:

“Bacterial poisoning can be avoided by two simple steps. Make sure that the food is initially boiled for at least 5 minutes. Then keep the lid closed from that point on and always re-heat meat dishes before serving.”

Here’s the recipe we used: 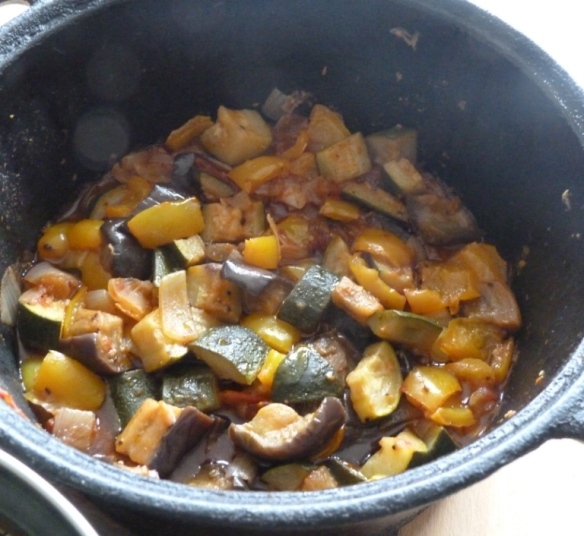 Heat olive oil in a pan.

Place in pot for one and a half hours to cook

Will stay hot for up to 5 hours

What is a haybox? It’s basically an insulated box in which you place your partly cooked food. The heat energy held in the pot and the food completes the cooking process without any external heat input. Haybox cookers are so called because the early versions used hay as insulation. It is also referred to as fireless cooking or retained heat cooking.

END_OF_DOCUMENT_TOKEN_TO_BE_REPLACED

Dusted off my original Solar Cooker from 2011 and tried to get cooking towards the end of the summer. Whereas 5 years ago I had very little luck in getting anything cooked, had much more success this year.

Improvements made as follows. 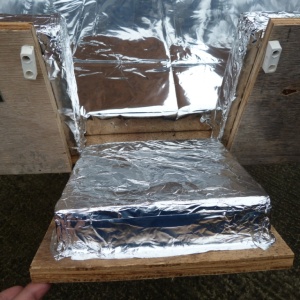 Refined the reflectors. The original design had 3 aluminium panels roughly bent to reflect additional light into the box. This has been changed to 4 plywood panels lined with aluminium foil and held at 120 degrees to the glass using metal brackets.  The side reflectors are quickly added to the Box Cooker using butterfly nuts.

Lining the inside with tin foil. The previous design had black card on the inside. This was not effective as although the black attracted the heat the card was useless in holding it. The tin foil reflects the incoming radiation around the inside of the box until it hits a black metal object.

Using a black metal plate on the base. A 2 mm thick aluminium plate was used at the base of the cooker. This absorbed and maintained the heat from the sun.

Use of a roasting bag. Given the disadvantages of a British summer, the belt and braces approach of a roasting bag meant that there was yet another layer of air insulation between the black cooking pot and the outside.

Addition of corner pieces. To ensure maximum reflection of the suns radiation into the Box Cooker the corners between the main reflectors was filled in with tin foil wrapped cardboard panels and held in place with bulldog clips. 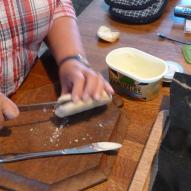 The finished cooker is shown below.

Click on the link below for details of how to build your own solar cooker to the design given here.